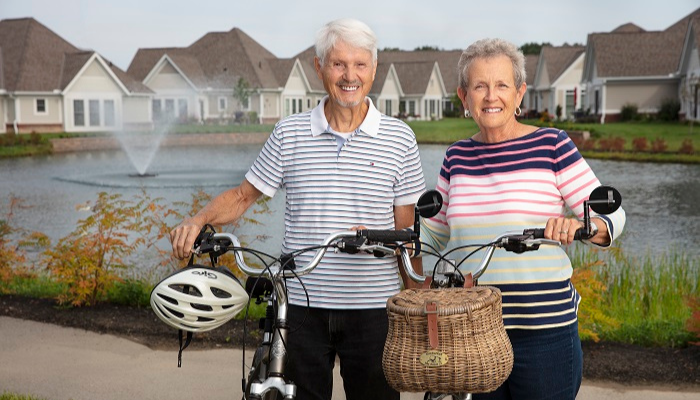 As college students get ready to begin classes in August, Otterbein Sunset Village is gearing up for year two of an innovative  resident engagement program. The program was developed in 2017 as a way to connect veterans living at Sunset with ROTC students in universities around the country. Since then, the program proved highly popular among residents and students alike.

With U.S. military veterans making up roughly 18 percent of Sunset Village’s residents, Life Enrichment Assistant Kallie Inman saw an opportunity to engage that population with some future military officers. She contacted ROTC programs at nearly 50 colleges and universities, and most agreed to encourage their students to interact with Sunset’s residents.

Before long, residents and students began meeting online, chatting face-to-face via video conferencing application Skype. Residents are thrilled to talk with students throughout the country. And students appreciate asking veterans about life in the military.

“Residents like interacting with students and asking about their studies, and students like asking veterans for advice about their future military careers,” said Kallie. “Most of the video calls last about half an hour or so.”

The Program Today - and Beyond

In addition to veteran soldiers, residents whose family members served in the military began joining the conversations with students. Now, widows of former soldiers and mothers to those currently serving in the nation’s armed forces enjoy talking with ROTC students.

Kallie identified a new way to include other Sunset Village residents in the unique program in 2019.

“We happen to have lots of sports fans living at Sunset Village,” she said. “So this year, we’re expanding our Skype calls to include student athletes. We’ve already connected with cheerleading squads and twirling teams from several schools, including University of Georgia, Washington, and Boston College.”

Learn More About Life at Otterbein

This program is in keeping with Otterbein Sunset’s vision of creating an organization that promotes innovation, provides comprehensive services, and builds community partnerships. It also meets our goals to inspire positive attitudes toward daily living among our residents, to help renew their former interests while discovering new ones, and to recognize the contributions each can continue making to the community.

Learn more about Otterbein Sunset and the lifestyle you can expect at each of our continuing care retirement communities.