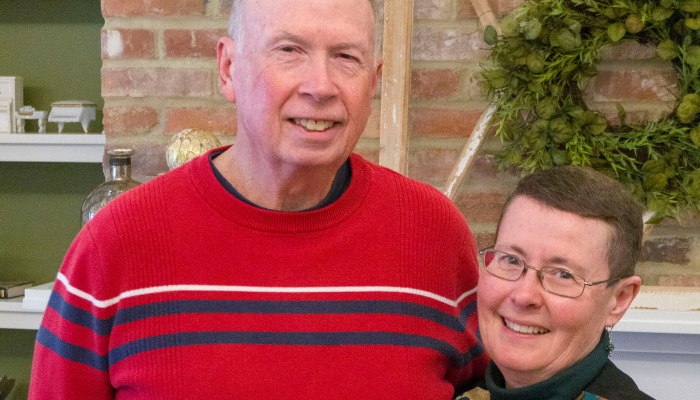 Some people might wonder what to do with themselves after they’ve retired. But for Connie and Chuck D. of Otterbein SeniorLife Lebanon, that’s not a problem: The couple helps out with the campus shuttle, arts programming, their neighborhood committee, and even house-sitting, to name a few things.

Read on to hear their story and learn more about the ways anyone can get involved on the Lebanon campus.

“Both of us found that volunteering has allowed us to meet a lot of people pretty quickly,” said Connie.

Before their move to Otterbein Lebanon, Chuck and Connie - lifelong Hamilton, Ohio, residents - volunteered here and there, but wanted to do more once they moved onto campus.

“A lot of residents say they live here because their children live nearby, but most of them say it’s because of the wonderful slate of programs at this campus,” said Connie.

Connie spends time each week in the programs department, helping residents sign up, answering questions, and spreading the word about the wealth of opportunities on campus.

Meanwhile, Chuck’s activity of choice is driving the shuttle.

“There are quite a few people in independent living who don’t drive and aren't too mobile, so the only way they can get up to the activities center and other places on campus is by picking them up. It’s a free service, and all the people are very, very thankful for this service we have on campus,” he said.

Chuck also volunteers in the Shaker Cellar, a campus consignment shop, and serves on the operations committee to help make sure residents’ voices are heard.

Both agreed volunteering also helped them quickly meet people on campus and settle into their new home.

“When we first moved in … we said, ‘Wow, how are we ever going to get to know all the people?’ Well, the people are really friendly, but with him working on the shuttle and Shaker Cellar and me working in programs, you do get to meet a lot of people,” said Connie.

Get your free guide to life at Otterbein Lebanon >>

“We became interested in OSL because of the pretty robust slate of activities, the good programming, as well as the creative arts studio. It’s just a beautiful campus. We felt that this campus being the size that it was, it would be able to fulfill all of our future needs easily,” said Connie.

She noted the continuing care aspect of the campus was another draw that put her mind at ease. And despite the campus’ large size, Connie said their experience so far has been top-notch.

“There’s never a reason to be bored around here. And we found that the people are absolutely wonderful. We’re constantly amazed at how friendly and open they are, and how accomplished,” she said.

Whether you’re passionate about volunteering, want to sharpen your skills, or can’t wait to meet new people, you’ll find a way to do it all at Otterbein SeniorLife Lebanon.