Get Ready for the 2019 Otterbein Olympics Events 🏆 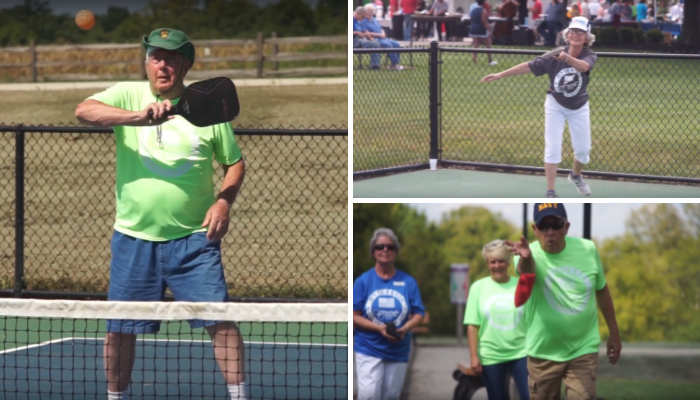 Last year, 150 residents from each Otterbein SeniorLife campus gathered in Lebanon for the first Otterbein Olympic Games. Not only was the event a way for residents to meet new friends and show off their skills, it went so well that the 2019 games were in the works soon after.

This year, the games will be held September 26, again at the Otterbein SeniorLife campus in Lebanon. Hear from five participants who competed in last year’s games on their experience and why they’re excited to go back this year.

John and Jerry, residents of Otterbein’s Franklin campus in Indiana, were an unlikely duo for the shuffleboard competition.

John had been playing for more than 70 years, had been inducted into multiple shuffleboard halls of fame, and had played shuffleboard on nearly every continent.

Jerry, on the other hand, was more of a novice. “I’d only played shuffleboard half a dozen times in my life before that,” he said.

But during one pre-games practice, John invited Jerry to come over and join him on the court. They clicked as shuffleboard partners and headed off to Lebanon for the competition.

During the event, John said he and his partner got into a pickle: With only 15 minutes left to play, they were now 33 points behind the other team.

“All of a sudden, we had luck and our opponents had bad luck, and we beat them by 50 points,” said John. “And it was such an amazing recovery and photo finish that our scorekeeper, who was the deputy sheriff over there, presented us each with a coin with the sheriff’s name on it. He said, ‘If you ever get in trouble in this county, show them this!’”

This year, Jerry says he’s not sure how the partners will be paired up, but he’s ready for anything. “My name’s in the hat, anyway, so I’m signed up and we’ll see what happens,” he said.

Thelma, another Otterbein Franklin resident, put her pickleball skills to the test last year as well.

Like Jerry, Thelma was a relative newcomer to the sport: “I had only been playing for maybe a year at the most.”

Although she described the play at the Olympics as “very serious,” Thelma and her partner came away with a medal.

The experience was a good one, and she enjoyed meeting new people, but she says her favorite part of pickleball is simply playing the sport for the fun and exercise of it.

“In a retirement community, there aren’t a lot of people that think they can play this, and I wish it could be exposed more to more people so they can see they might be able to do it,” she said.

How important is it to exercise and stay hydrated as we age? >>

Joan not only showed off her cornhole skills and placed third at the event last year, she took part in the inter-Otterbein choir that also entertained the attendees there.

“The director of the choir there was fantastic. She pulled us all together...it was just a lovely experience,” Joan said.

She also said the lunch offerings were one of her favorite parts of visiting the Lebanon campus. During the Olympics, chefs from each campus prepared their signature dishes so everyone at the event could sample a taste of Otterbein.

Finally, Joan said another favorite part of the Olympics was meeting other residents in addition to staff from the different campuses.

“Everything was run beautifully,” she said.

“I had just taken it up recently,” she said. “And we got to play on really top-quality courts [at the games.]”

She agreed with Joan that the choral group and the food were highlights of the event. This year, Geri plans to return and bring along other Marblehead players, who’ve stuck with the sport throughout the year.

“The weather cooperated, and there was fellowship … It was a good experience, and I enjoyed seeing another campus and participating with new people I had never met before,” she said.

Get Ready for the 2019 Otterbein Olympics

Are you ready to experience all that 2019’s Otterbein Olympics has to offer? Save the date on your calendar and join us for a day of fun, fellowship, and light-hearted competition. If you’re considering a move to Otterbein, you’re invited you to get a taste of the fun and cheer on the senior athletes. RSVP to 513-933-5471 to save your seat!

Staying socially and physically active are just two ways Otterbein promotes whole-person wellness. Learn about the nine degrees of wellness and get tips for living a healthier life right now.