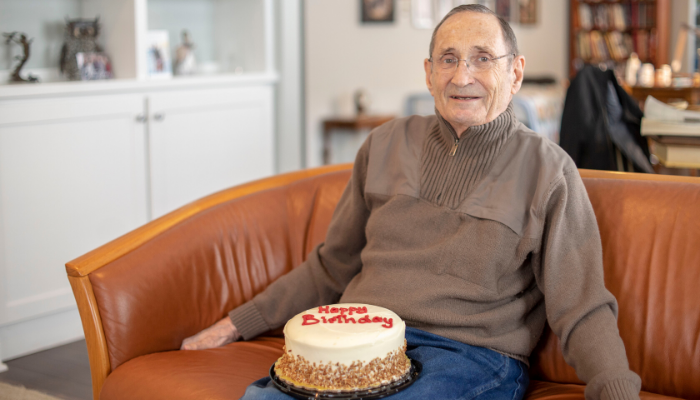 No, he’s not a time-traveler: He’s a leap-year baby born on Feb. 29, 1940. Read more about what it’s like to have this unusual birthday (and what a leap year really is, anyway) in this story.

So, how does one celebrate a birthday that technically only comes around every four years?

“People just conveniently forget and pretend it didn’t happen,” Sam joked. “No, I leave it up to their discretion as to whether it’s the last day of February or the first day of March.”

The odds of being born on February 29 are pretty slim -1 in 1,461, in fact. But for him, Sam said there isn’t anything too exciting about his uncommon birthday.

Another conversation piece that he does enjoy discussing? The range of holidays the rest of his family’s birthdays make up. His wife, Karen, was born on Mother’s Day. Their son was born on April Fool’s Day, and their daughter was a Valentine’s baby.

“We pretty much have the holidays covered,” he said.

What is a leap year?

To understand the concept of a leap year, you need to distinguish between the solar year - the number of days it takes the earth to complete a full revolution around the sun - and the calendar year, which is a 365-day human creation.

A calendar year has 365 days, while a solar year actually has about 365.25. That quarter of a day doesn’t sound like much, but over time, our calendar wouldn’t match up with the correct solar season without leap years.

EarthSky explains that over 100 years without leap years, the calendar would be off by roughly 25 days. Eventually, February would become a summer month.

About every four years, the calendar includes February 29th to make up for that extra quarter-day in the solar year. And that’s what we call a leap day.

Sam and his wife of 50-odd years have been at Otterbein for just over a year and a half. He said they’ve both settled into their new home nicely and enjoy all the opportunities on campus.

The Kansas natives lived in the Sunflower State for most of their lives, moving to Ohio as they got older to be near their daughter and grandchildren.

“The facilities at Otterbein are top-notch … and the food. There’s someone in the kitchen who makes the best soup I’ve ever had,” he said.

Sam said he and his wife enjoy Otterbein as the fruit of a lifetime of preparation: “We have been so fortunate in so many ways, and part of it is we have done a lot of planning all our lives.”

Otterbein Lebanon is a bustling, 1,200+-acre campus in southwest Ohio. Our community is a place where residents can enjoy life their way and gain peace of mind that help is always available if it’s needed.