If there was ever a model of how full life can be for men at Otterbein SeniorLife, it’s resident Don R. Having lived at Otterbein St. Marys for 17 years, Don has seen and done so much in his time at Otterbein, and he’s not about to slow down now.

At Otterbein, Don has had a hand in a little bit of everything ― woodworking, running the sound booth, volunteering, sharing goodwill gestures with staff and residents, and sitting on several resident committees over the years. He is a strong believer in lifelong learning and is constantly trying new things.

“I didn’t come to Otterbein to sit and do nothing ― I came here to be active,” he said.

Choosing Otterbein was a no-brainer for Don ― his parents had lived at Otterbein, and he was already impressed with the superior level of care they received.

“When my parents were here, my brother and I never had to worry about Mom and Dad because we knew that they were being looked after,” he said.

After spending 29 years working for Nationwide Insurance, Don and his wife knew it was time to downsize and start a new chapter in their lives. Given the positive experience Don’s parents had, they already knew Otterbein was the place for them, so much so that they didn’t even consider any other senior communities.

Hard at Work in the Woodworking Shop 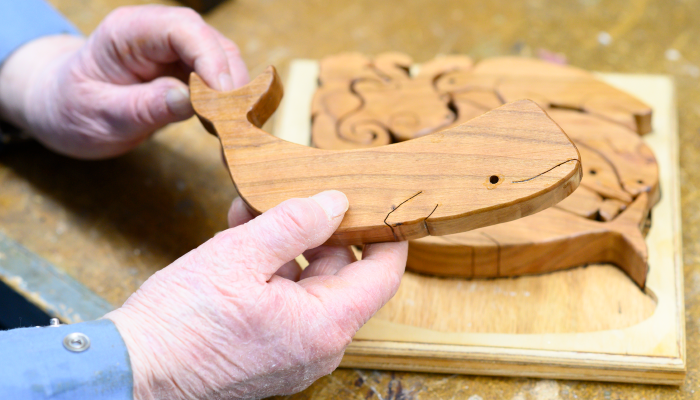 Before working in the insurance industry, Don was a vo-ag teacher for three years, so he already had a knack for working with tools and equipment. When he came to Otterbein, he was immediately drawn to the on-site woodworking shop.

Since then, the shop has become one of his favorite places to spend hours crafting everything from toys to large pieces of furniture. Everything he needs is right there in the spacious, air-conditioned shop, including:

Don’s favorite item that he helped build was a large table ― 7 feet long, 13 inches wide, and 2 inches thick ― made with a board valued at roughly $800. He also loves making small toy cars and puzzles for children to enjoy.

Don loves to lift up both residents and staff by volunteering on various committees, including the resident-operated Partner Appreciation Program, which spreads kindness and appreciation to the employees at Otterbein. Throughout the year, residents donate to the program to give back to the partners who work hard to make life at Otterbein fun and enriching.

Every year, the residents put on a party in honor of the Otterbein partners. In light of the pandemic, last year’s party was canceled, but that didn’t stop Don and his friends from showing their appreciation. Thanks to the residents, each Otterbein partner received a $100 gift certificate.

In addition, Don helps run the audio-visual equipment for special events and programming at Otterbein. “If you ever come to an event at Otterbein, I’m likely in the sound booth doing that type of thing,” he said.

Spreading Kindness Through the Written Word

Of course, when the pandemic hit, in-person volunteering was temporarily halted, so Don turned to an alternative way to lift spirits by writing and sending cards of encouragement ― roughly 2,000 over the past year.

“Several years ago, when I had friends of mine or people I knew, I’d send them a get-well card or a little card cheering them up, and I always tried to put a piece of candy in with it. So I started sending cards when the pandemic came,” he said.

Don used a Hallmark computer program to create personalized cards for both residents and staff, and of course, he included two pieces of Dove chocolate in each one.

“This has been a blessing to me because it’s kept me busy during the last year when you couldn’t get out much,” he said. “I know people really appreciate it.”

Don has gathered a lot of wisdom over the years, and perhaps his best piece of advice is this: never stop learning!

“My understanding is that many people, when they get that wristwatch given to them or they retire, they think life is over. I’ve worked harder here [at Otterbein] sometimes than I when I worked. The staff here at Otterbein work so hard to give us opportunities to continue to learn and do things,” he said.

At Otterbein SeniorLife, we know that choosing the right senior living options requires a lot of research and thought. That’s why we put together a list of our most frequently asked questions all in one convenient place. Explore your free guide today!