My Journey to Otterbein: Rosemary S. 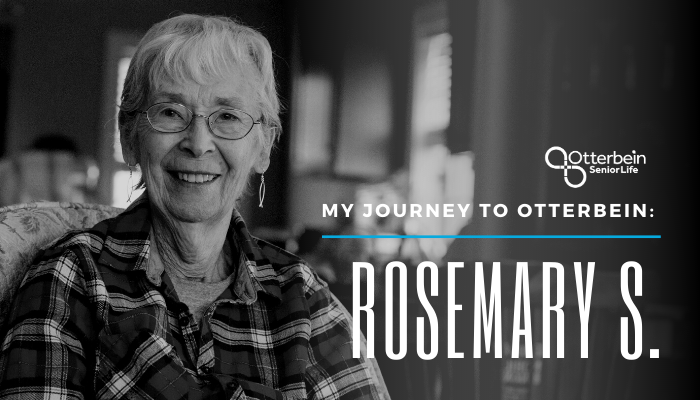 If you’ve always enjoyed an active lifestyle, there’s no reason you can’t continue that at an independent living community. In fact, most residents say they have even more time to do what they love.

Read about Rosemary S., whose busy life on a farm led her to a new kind of active living at Otterbein Lebanon.

Rosemary and her husband, Hal, searched high and low for just the right place to build their dream house when Hal retired in 1991. They found it on a 112-acre farm near Clarksville, Ohio, where they lived for 20 years actively involved in farming, church, and the community.

When Hal passed away in 2013, Rosemary decided to downsize.

“I wanted to make the decision so my children didn’t have to make it for me,” she says. “And I wanted to do it while I was still healthy and could meet other people.”

Rosemary chose The Orchards, Otterbein’s new ranch homes, for a number of reasons. Foremost on her list was finding a place that offers several levels of care.

“Because I have no family close by, I wanted a place that has continuing care,” she says.

Her roomy three-bedroom home has an open floor plan that easily accommodates the select furnishings she brought from her farm. It also has numerous features that convinced her to make Otterbein her home.

“I love to bake, and it has spacious storage for the pots and pans,” says Rosemary about the gourmet kitchen. Directly off the kitchen is the garage, making it easy to come and go in her car or golf cart (a common mode of transportation around the Otterbein community).

Rosemary designated one of her bedrooms the “everything room,” where she reads, uses Wi-Fi, works on hobbies — and where she’ll soon plant seeds for spring gardening. Her guest bedroom provides a comfortable and welcoming space when her children and grandchildren visit.

Rosemary made fast friends at Otterbein. Not long after she moved in, a neighbor stopped by “and stayed over an hour,” she says. “She has become a good friend.”

Just as busy as on the farm, Rosemary’s calendar is filled with volunteer projects, social activities, and church. She recently became an Otterbein volunteer visiting with residents in the transitional care area, and is a long-time volunteer at Clinton Massie Elementary, where students call her “Grandma Rosemary.”

An avid baseball fan, she doesn’t miss Otterbein outings to Cincinnati Reds and Dayton Dragons games. And recently she became a member of the Otterbein-Lebanon United Methodist Church.

Making herself at home alongside Rosemary is Sheila, her rambunctious Australian Cattle Dog mix, a stray she adopted.

“There’s plenty of room here for Sheila to chase her ball until she finally gets tired,” says Rosemary.

Getting tired? From the sound of things, Rosemary doesn’t know the definition. She lives life to the fullest thanks to her new ranch home and the amenities at Otterbein. Learn More About The Orchards at Otterbein Lebanon

The Orchards are new ranch-style homes on the Otterbein Lebanon campus. They offer plenty of space and stunning features, including:

See more about our ranch homes and other independent living options at Otterbein Lebanon here.