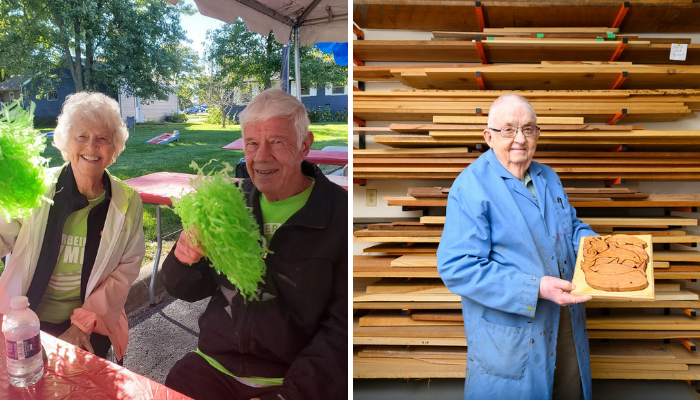 Every resident has a story behind how they heard of Otterbein SeniorLife. For some, they had friends who lived there. Many had their adult children tell them about Otterbein.

For other current residents, they were able to experience Otterbein through their parents who lived there before them. We call them “legacy residents.”

Hear from three legacy residents at Otterbein St. Marys why they and their parents chose Otterbein for senior living.

John and Jane G.: “We Love Otterbein, and We Knew We Would”

John and Jane G. moved into Otterbein in December 2021, but they were well acquainted with Otterbein St. Marys long before then, as Jane’s mother and John’s father both lived there prior to them.

“John’s dad and my mom lived on the same street, which was really nice for us,” said Jane.

John and Jane, who lived near the campus, visited often and made many fond memories at Otterbein. One of them was taking their parents for pontoon boat rides on Grand Lake St. Marys.

Fast forward to now, and John and Jane are loving life at the same campus their parents called home years earlier. It was an easy decision. “We knew we wanted to come here. We didn’t look around anyplace else,” said John.

Jane added, “John’s dad loved it. Mother loved it. And we loved coming over and being with them. We love it, and we knew we would.”

Don R. is a longtime resident of Otterbein St. Marys, having lived there for more than 20 years. He’s been extremely involved on campus in everything from woodworking to volunteering to resident committees. (You can read more about his story in this blog.)

Of course, the apple doesn’t fall far from the tree. Don’s parents were also highly involved when they lived at Otterbein beginning some 30 years ago.

“Dad was very active here. He was chairman or president of resident council,” said Don. “Mom and Dad just got involved all the time.”

When it came time for Don and his late wife to choose a senior living community, they searched in Columbus, Ohio, where they’d lived for years, but nothing felt quite right. Then, they visited Otterbein, and the rest is history.

“It just almost felt like coming home because my parents had been here nine years, and me and my father – we saw this place grow,” he said. “So it was like coming home, really.”

Otterbein is much more than a place to live with amenities. It’s a true community full of kindness, generosity, and most important, fun. We call it the Spirit of Otterbein.

Want to hear more stories about Otterbein residents? There are many to choose from in our Otterbein blog.