Spirituality at Otterbein: An Interview With Pastor George Phillips 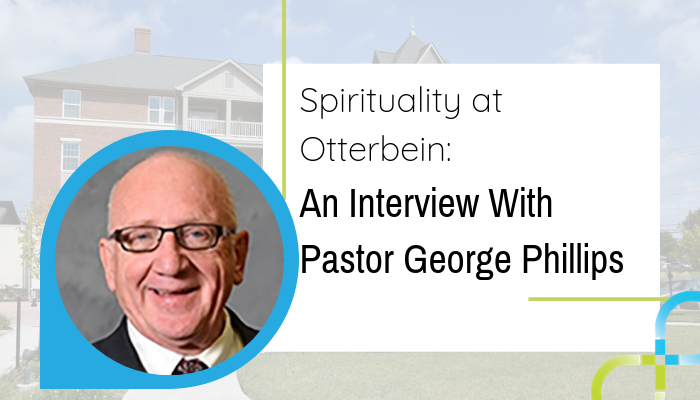 The Rev. George Phillips, pastor and chaplain at Otterbein SeniorLife, says the most important thing about his work there is the unexpected moments.

“One of our sayings is, ministry is what happens when you’re on your way to do something else. I never know what’s going to happen when I walk through the door,” said Phillips, who’s been at Otterbein for seven years.

Faith-Based and Open-Armed at Otterbein

Since 1912, OtterbeinSeniorLife has been affiliated with the United Methodist Church. But being a faith-based retirement community certainly doesn’t mean people of different faiths aren’t welcome.

In fact, according to Phillips, about 16 percent of people who moved into Otterbein last year were affiliated with the United Methodist Church. Fifteen percent were Roman Catholic, and 35 percent said they weren’t affiliated with a particular religion.

“Our job here is to support people and to help people in their personal growth, no matter what it is,” said Phillips. “We don’t follow one denominational formula, but we incorporate many, many different expressions of faith.”

He went on to talk about the diversity of influences present at every Sunday worship service on campus.

Learn more about how we promote complete wellness at Otterbein >>

Enhancing Your Spirituality Through Connections

Phillips said one of his favorite ways for people to get in touch with their spirituality on campus is through a connection with other people.

An example is the sermon text Bible study, which he leads each week from the fall to the spring. Participants gather, hear a short talk on the next Sunday’s reading, and split into groups to discuss their takeaways.

“They begin to talk about all sorts of things that relate to the text, relate to their life, relate to each other. The hardest thing is to get them to try to stop talking so we can move on to the next subject,” said Phillips.

After the Bible study, he said the conversations often continue out the door as participants ask each other to meet for lunch or stay in touch.

Get a closer look at life on an Otterbein campus >>

Why is Spirituality Important?

Spirituality, in whatever form it takes for you, is one of the best ways to find an inner peace, says Phillips.

“We were created as spiritual beings. So much of who and what we are is spiritual. It’s part of being an emotionally well person,” he said. “The happiest people I know are those who have found a home within themselves for their spirit.”

Spirituality is also one of the nine degrees of complete wellness that we focus on at Otterbein, along with the following:

Learn more about how we promote the nine degrees of wellness at our continuing care retirement communities, plus get tips for improving your own wellness, in this free guide.