Spotlight on Creativity at Otterbein SeniorLife 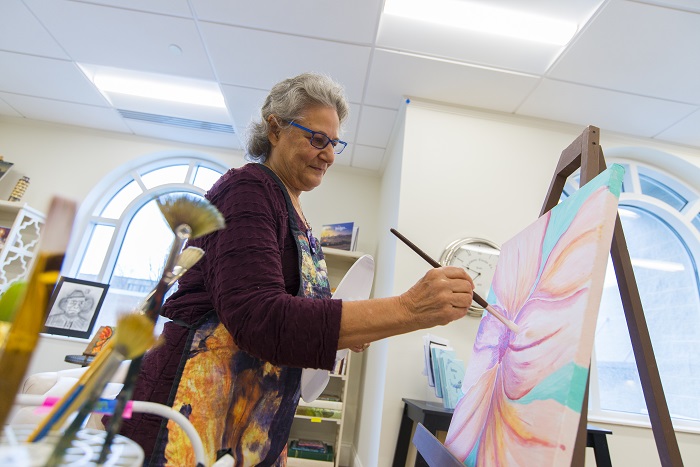 Our residents are full of creativity in every way. Read stories of three residents who are involved in music, woodworking, and photography at Otterbein - and get inspired yourself!

Otterbein resident Ginny L. has been involved with the musical arts on campus for decades - long before she became a full-time resident there.

Ginny’s late husband started the choir at the campus church, which they attended, back in 1971. Since then, and up until a few years ago, Ginny accompanied the choir on organ every Sunday.

Today, she’s still the organist at the church (without the choir), and she’s the director of two handbell choirs that perform monthly.

The involvement keeps her busy, but the 85-year-old said that’s a good thing.

"It just gives me a reason to keep active, and I need that … by keeping involved with music, it’s very helpful to me mentally and physically,” she said.

As director of the handbell choirs, Ginny also trains new members to ring the bells and read the music.

“It’s a new medium for them altogether, and it’s just very rewarding that I can stretch their minds at this point in their lives and [help them] enjoy a different kind of music,” she said.

Some of Ginny’s fond memories of music include helping her husband prepare for a yearly choir performance at the church, where she would write a script and help plan a program. One that stands out to her was called “Feed My Lambs,” featuring 12 men as the 12 apostles of Jesus.

Another of Ginny’s music memories was her involvement with the Warren County Music Club, which met on Otterbein’s campus once a month. Participants would take turns playing duets and trios on the pianos, and the program ended with two people sitting and playing at each piano: “It was fun!” she said.

For more than 70 years, Eldon has been bringing creations to life in wood - “And I’m only 52 years old,” he said with a laugh.

Two things jump-started Eldon’s love of the craft at age eight: He received an X-ACTO knife as a gift and discovered a Remington Knife Company pamphlet about woodcarving that his father brought home.

“I was really inspired by that little pamphlet,” he said. Eldon still has his first-ever woodcarving, a ball-in-a-cage design that’s popular among whittlers.

Although Eldon has created hundreds of pieces throughout his life, they all follow the same principles of Danish Modern design, with clean lines and mid-century-inspired looks. And he’s never created copies of his original works.

“My designs are all creations - they’re not copies of anybody else,” he said. “The inspiration is the most fun - it’s a creative drive. So I’ve got all these different ideas in my brain, swirling around, and more projects always started, and more that I want to execute.”

Eldon has published two books to share his knowledge and passion for his art. His first, published in 1970 and simply called Woodturning, was considered one of the earliest contemporary volumes in that field. His second, Woodturning: Objects and Procedures, was published in 2016 and contains information he’d been working on for decades.

He’s also taught courses on marquetry - a design technique that uses inlaid wood to create pictures - and enjoys connecting with fellow woodworkers at a regional woodcarving event that he helps manage with another Otterbein resident.

On an average day at Otterbein, you’ll find Eldon volunteering at the concierge desk or honing a project in his garage woodshop.

“I work in the shop almost every day. Some of my best work, I think, is some of my most recent,” he said.

Otterbein resident Linda H. (that's her water drop photo above) says the first picture she ever took was possibly the world’s first selfie.

As a child, she was “mesmerized” by cameras and couldn’t keep her mind off the family’s own camera one evening during dinner. It sat on a cabinet in the hallway, ready with film and a flashbulb. Despite her mother’s instructions not to touch it, she reached up and pressed the button, preserving a humorous photo of her eyes and nose peering above the edge of the cabinet.

“My mother said, ‘Did you touch that camera? We’ll find out later.’ I didn’t know what she meant,” Linda recalled.

Linda’s father further encouraged her photography, especially one evening as they were out fishing together and a beautiful sunset appeared on the horizon.

“He handed me the camera and said, ‘Here, you take the picture because you can do so much better than me.’ And I took the picture, and I was really touched by that. And when we got the picture back, I was very pleased by it. From then on, I was hooked,” she said.

While Linda and her husband were raising a family, she didn’t have the time or money to take photos, although she did use her artistic talents for sketching. But after a stroke made sketching difficult, she rediscovered her love for the camera.

She said her joy of photography stems from a few things: Her love for creation, God, nature, and her father, who was part Native American and taught her these values.

“It was God’s gift to me to be able to capture his creation for others to enjoy. So if you get a gift from God, can you sell it?” she said.

That’s why Linda enjoys freely sharing her talents with others, including having a section on her website where churches and other faith-centered organizations can download pictures to use for free.

Her photography has also been featured in numerous books and magazines, has won her awards like the Aubudon Amateur Photographer of the Year, and has even been used in a poster for the World Memorial Fund Organization after 9/11.

Linda said she enjoys teaching others to acquire the photographer’s eye, an ability to see and capture an interesting photo. One of her young students’ photos was featured on the cover of a calendar. And at Otterbein, she’s helped out with activities like the Memory Garden, the campus coffee shop, and the general store.

Wherever she goes, you’ll find Linda with a camera and ready to capture the action.

“A lot of times, things will happen right in my yard,” she said.

Nurture Your Creativity at Otterbein

Ginny, Eldon, and Linda are just a few of countless other Otterbein residents who have found a place to cultivate and grow their creative talents.

At Otterbein, we believe creativity is one of nine essential keys to living a healthy and balanced life. The other degrees of wellness include:

To learn more about the degrees of wellness and to get tips for trying them right now, download our free guide.