The Otterbein Story: 110 Years of Service to Seniors

The year 2022 marks a special milestone for Otterbein SeniorLife – the 110th anniversary of our founding. Our rich history provided a strong foundation upon which Otterbein continues to build daily. We’ve always been about caring for those in need, and although that may look a bit different than it did 110 years ago, our central mission hasn’t changed.

Today, you know us as Otterbein SeniorLife, but at the time of our founding in 1912, we were called the United Brethren Orphanage and Home for the Elderly. In 1913, the name was changed to Otterbein Home.

As the name suggests, Otterbein was founded to be a refuge for orphaned children and seniors who were sick or unable to care for themselves. Otterbein would serve in this capacity until the 1950s when the organization began to focus exclusively on care for elders and phased out the orphanage. It was also around this time that Otterbein opened a skilled nursing care center.

The 1970s brought new opportunities to Otterbein, such as opening a Gerontology Center, an educational center for continuing training for professionals in the field. Otterbein also branched out with its service line, starting construction on a new phase of independent living residences for residents not yet in need of assisted living or skilled nursing.

New additions to the main Otterbein Lebanon SeniorLife Community were added, including The Gallery independent living apartments and The Aurora assisted living community, and a new Otterbein headquarters building was constructed across the street in the Union Village development. 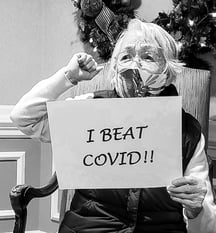 Expansions at other locations included the opening of Cornerstone Cottage, a skilled nursing and rehab small house, at Otterbein Marblehead; a new independent living area at Otterbein St. Marys called The Waterfront; and the addition of 10 skilled nursing/rehab suites at each SeniorLife Neighborhood.

When the COVID-19 pandemic posed a threat to senior living communities across the world, Otterbein took an aggressive, proactive stance to keep our residents and partners (employees) safe. Through frequent testing, vaccination clinics, and other precautionary measures, Otterbein was able to minimize COVID-19’s impact and protect our residents, partners, and their families.

Find an Otterbein Location Near You

With numerous locations in Ohio and one in Indiana, Otterbein could be just right for you or a loved one. You can search our locations by clicking below.

Find an Otterbein Location Near You