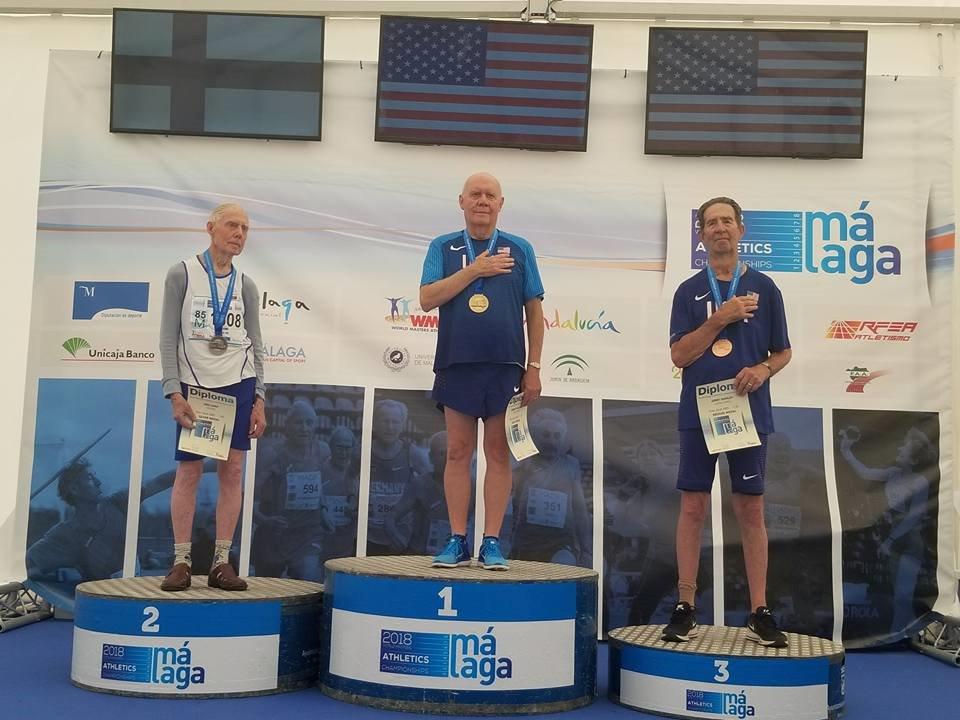 Imagine, at age 85, being in a seaside town in Spain on a 110-degree day and winning a gold medal in an international pole vaulting competition. That's exactly what Otterbein resident Bob Arledge did on September 12, 2018, when he placed first in the World Masters Track and Field Championship competition in Malaga, Spain.

Bob took the gold medal by vaulting 5'10'' and edging out the second-place competitor from Finland, who vaulted 5’5". There were six final competitors in this 85-89 age group representing five countries, including two from the U.S. Last year in Toronto, Bob placed first in the Canadian National Championship, which included athletes from North America, Central America, and the Caribbean.

To compete, Bob uses a fiber pole that’s 11 feet, 6 inches tall. He decided against paying the $600 charge to take his personal pole to Spain, so used a substitute pole at the event. Before he jumps, Bob chooses not to know the height he is facing. In fact, he avoids even looking at the hurdle, feeling that might undermine his self-confidence.

Vaulting into the air requires Bob to run down a 50-foot lane, achieving maximum speed at the end to help propel himself upward. The goal is to fall on the foam mat on his back. And yes, he has suffered a few injuries in his career, including a dislocated shoulder, broken rib, and leg muscle injuries.

Bob began pole vaulting back in high school, when his first poles were bamboo and vaulters landed in sawdust or sand pits. According to Bob, being a good athlete doesn’t necessarily mean you’ll be good at pole vaulting. The biggest challenge for any vaulter is getting their legs over the bar, which demands strength in the core body muscles. A winning distance runner, for example, might not be any good at pole vaulting.

Keeping Fit at Any Age

To keep in shape, Bob swims every day at the Otterbein YMCA Aquatic Center and lifts weights twice a week. He also does leg lifts while hanging from gymnastic rings in his garage to maintain strength in his abdominal muscles. Fourteen years after his retirement from the U.S. Air Force, Bob decided he needed to become more physically fit, which led to his decision to take up pole vaulting once again.

Since that time, he has lost weight, improved his health, and become physically stronger than he was before he took up his sport again in 2002.

“You have more control over your health than you realize,” he says. “A regular exercise program and proper nutrition are where to begin.”

Bob believes the happiest seniors are those who remain active and have a goal. He favors a Mediterranean diet, which emphasizes lots of fruits and vegetables while avoiding too much sugar.

See how a proper diet and regular exercise can help you stay healthy as you age. >>

Bob is a resident at Otterbein SeniorLife in Lebanon and volunteers his time at Bishop Fenwick High School coaching both boys and girls in pole vaulting. He is also a member of the Worldwide Senior Pole Vaulting Brotherhood, an aging group, declining in numbers but remaining true to the philosophy “Never Give Up.”

When Bob returned from the World Master championships, Otterbein SeniorLife employees and friends lined the halls to welcome Bob home with a celebration parade. Senator Steve Wilson even presented Bob with a senatorial citation - giving him special recognition for a gold medal in the sport he’s always loved.

We're always having adventures at Otterbein SeniorLife. Read more to keep up with them!